The year of 2014 marked our first year of operation here at Eventyoda. This year, we are grateful to have held 40+ activities throughout the year with teams all over the Bay Area. We worked with amazing vendors who put their heart and soul into making each event an event organizer’s dream. We met fascinating team members accomplishing amazing feats within their respective jobs and learned just how much it takes to be an effective and successful team. We even had some fun ourselves while discovering the hidden diamonds of team building events available within the wonderful city of San Francisco and its surrounding cities.

From encouraging the laziest team members to easing the workload of the toiling event coordinators to feeding off the highly enthusiastic activity vendors, we are humbly proud of doing our part in simplifying the event booking process and strengthening the bonds of the corporate teams all across the Bay Area, even if it was through European Sword Fighting (did you even know this was possible?).  Now…without further ado…I’d like to present…our First Annual Preciously Treasured Team-Building Moments of 2014. 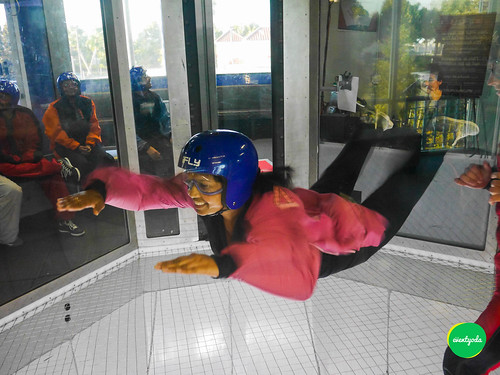 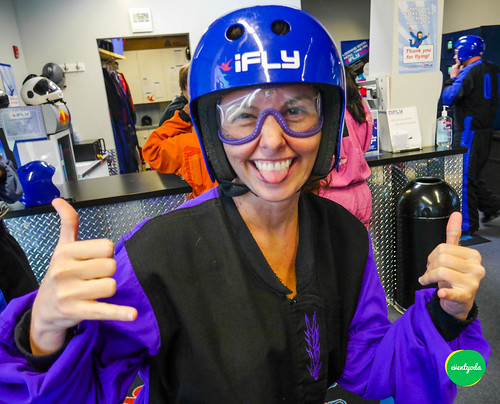 In the words of the morally questionable, but unquestionably talented R. Kelly, we at Eventyoda “believe we could fly”. That’s why we got along so well with the Imperva employees, who not only believed, but also capitalized on this belief through their indoor skydiving event at iFly. Naturally, the team members started out rigid and reliant on their instructor as they acclimated to roaring winds of 130 miles per hour keeping them afloat in the tunnel. But as the day went on, our Imperva homies noticeably eased up and became more receptive to the wind currents, managing to pull off their best impression of a feather. In some instances, they even started to resemble an adolescent Superman learning to roam the skies. Ultimately, almost everyone’s secret superpower desire is flying, and Imperva managed to do just that. 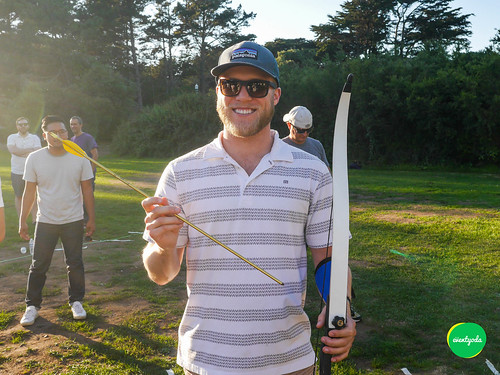 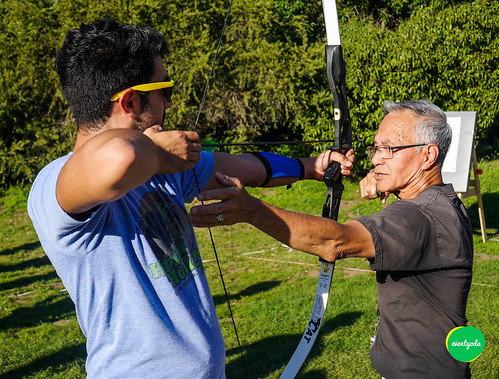 There’s something primal about shooting a bow and arrow. Maybe it takes us back to our days as hunter-gatherers, where groups of men would roam the plains in coordinated pursuit of bison for dinner. Or maybe it reminds us of the last time we watched Legolas, the bloomingly stunning elf, take on an army of orcs with pinpoint accuracy. Either way, this feeling combined with a legitimate 1 vs. 1 archery competition really made me feel like I have a pair. After 90 minutes of practice time, the Betable employees voted on their top two perceived best archers to go head-to-head for the coveted Golden Arrow. The competition was fiercely close, but in the end, the winner turned out to be the guy with childhood experience (muscle memory is real). Regardless, both were graceful and gracious participants, and the Betable team went home well primed for an evening episode of Game of Thrones. 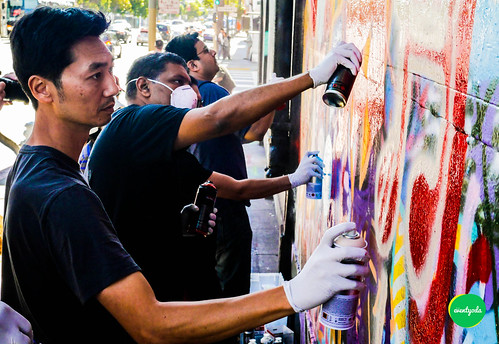 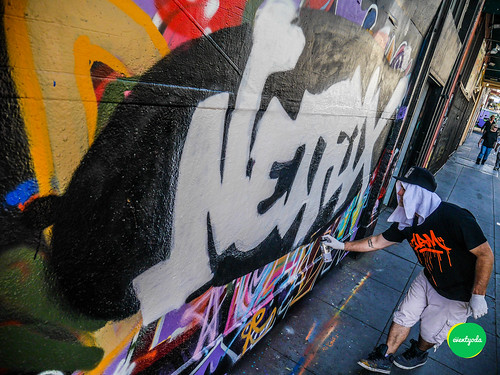 We truly loved the graffiti workshop at 1AM SF with Netflix. It was a multi-faceted event, with historical insight into the relatively recent art of graffiti, as well as hands on participation in both marker-based and spray paint graffiti. The Netflix team collectively painted a life sized mural of their company name on the wall space outside the gallery, serving a double purpose of team bonding and built-in marketing for the day. Realistically, how many times will you have the opportunity to legally spray paint a wall during the day with a group of friends? We’ll leave that question up to you.

4. Wine and Paint with Willis Insurance 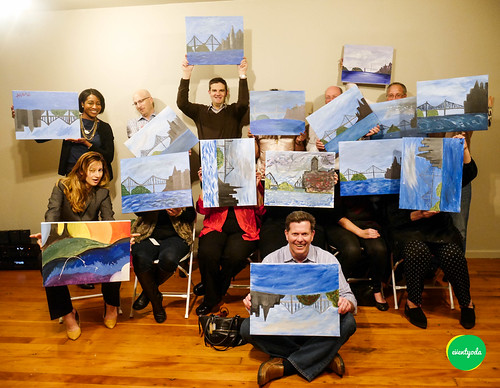 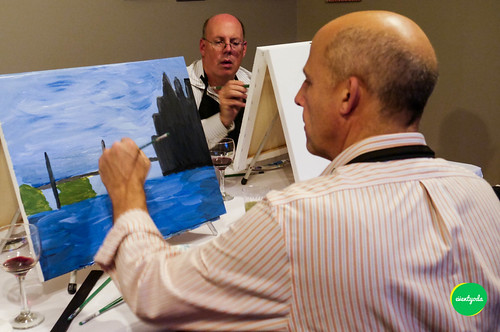 Wine and paint was a very popular event for us in 2014, but this particular one had its special charm. Willis Insurance employees from all over the country attended this team building event for their annual meeting. The wine and paint was at Beyond Canvas in the Mission district of San Francisco, where the instructors gave the group an option to choose from three of the paintings on display in the studio. One of the options particularly inspired the group, as it resembled the impending “superstorm” that was to hit the Bay Area (and potentially delay some of their flights) the following day (December 11, 2014). They fearlessly flipped the looming storm on its head, making room for a collection of epic paintings that will serve as a testament to their surviving encounter with the superstorm.

5. Pottery and Puttery with Genentech 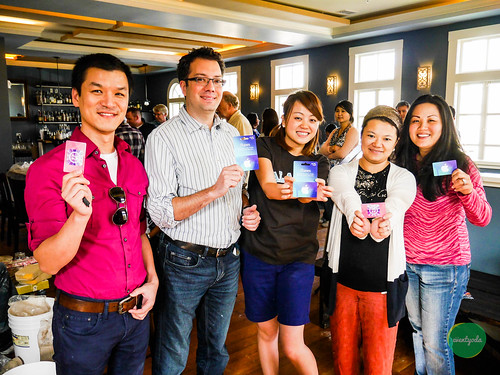 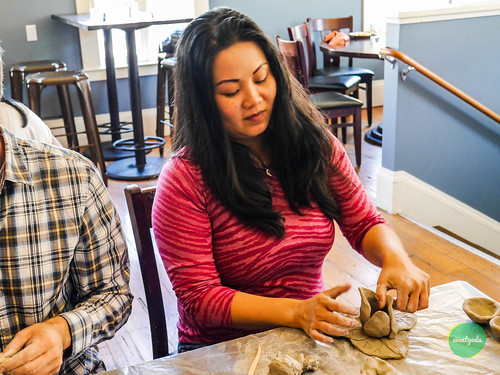 One of our favorite things to do at Eventyoda is come up with completely new, unique event ideas and bring them to life. You could say this event was one of our signature EY creations, a combination of mini-golf, pottery, drinks and a  delicious lunch at Urban Putt (also in the Mission district of San Francisco). First, the Genentech team members mingled with martinis and appetizers while putting on the Urban Putt’s intricately creative indoor course. They then had an amazing meal (Chicago deep dish pizza) prepared by Urban Putt’s in-house chef. This followed with a an award presentation for one of their employees and a greatly entertaining round of pottery. The makers of the top five “best” pottery creations (as according to a very strict set of guidelines guided by my aesthetic sensibilities of the day) each received a grand reward (an iTunes gift card!!!!!) while the rest of the crowd engaged in a discussion of their creations and a spirited reflection into the creative process. All in all, it was a day of creative firsts and perfectly rounds out our top 5 most treasured moments of 2014.

To all my fellow admins out there, newbies and old timers, I’m sure you have been placed in a position where your managers have given you this wonderful project of putting together a Team Building Event with or without any guidance. To me, I have been placed in this predicament numerous of times and I know the nerve wrecking feeling with planning a special event oh so well! Whether you’re feeling lost and don’t know where to start or need just a wee bit of guidance, here’s a few tips to set you on the right direction or keep you on your feet to planning maybe one of your most memorable events for your team!

This is on the top of my list! Make sure you know who your target audience will be. Knowing this will set you in your motion for the rest of the event planning. Whether your event will be business related or just a fun and social event, this can help you start to think of some ideas on what your goals should be.

You’re probably thinking, “Business Purpose?! Whaaat?!” Yes, you read that right!! In a corporate world, “Team Building” doesn’t mean that we finally get to let loose and not have a Business Purpose! 99.9% of Corporate Team Building has a Business Purpose tied behind it. Don’t let anyone tell you otherwise! Make sure you know what the purpose of your event is so that you don’t miss out on any details surrounding your event. There’s a business goal here people and if you don’t know what that is, ASK!!!

Whether you work for a Fortune 500 or a small business company, knowing your budget can help you negotiate with your vendors at your best. Trust me, they want your business so there are lots of Team Building companies out there that can accommodate to most of your needs. Before you sign a contract, it’s a good idea to have a spreadsheet of everything that you will need to pay for this event. Don’t forget to add all the necessary markups. For example taxes, gratuities, etc. Trust me, these can all add up in the end. You want to look like a super star planning your events and not going over budget can get you there!

Now that you have gone this far, lets think fun!! Of course if your manager has suggestions, then this task will be easier to plan, but if not, there’s a wide variety of themes that you can choose from. Have fun with it and make sure you put your own special touches to this Theme. You can use the Theme throughout your invitations, event programs, giveaways, and some signature cocktails are just a few suggestions. Giving it your own special touch not only shows you have a creative mind, but will also surely impress your audience.

I cannot stress this enough! Make sure you have a few dates in mind to schedule this event. It will give you the option to negotiate prices with different vendors. Also keep in mind that there are other Corporations that schedule events, so you might run into not getting the actual date that you want. I understand there’s sometimes a specific date that’s already been picked out for you, so having a couple of event ideas would be beneficial to you. Don’t forget the weather! As we live in an unpredictable place for climate, have a back up plan for that as well! You can also ask vendors if they offer alternatives if and when weather changes that day. Be prepared to think on your feet with the help of the vendor when issues arise. This shows that you have thought about solutions to problems ahead of time. Thinking on your feet will give you so much credibility!

I hope that these few tips have shed some light for you. Remember make sure to have some fun with this! Be engaged with your audience at the time of event. Mingle; ask if they are having fun or need anything. By doing this you can get some great tips for future events! You can also send out a survey of what they liked and didn’t like or what they would like to see in the future. To our old timers, I’m sure you have found your own way of mastering projects like these. Please feel free to send us some of your quick tips or fixes! If you have any other questions, emails us at contact@eventyoda.com.

We are excited to introduce to you EventYoda, a fun new way to discover and book awesome teambuilding activities around the Bay Area.

We believe that the process of booking fun team outing shouldnt be a harrowing experience. It is our mission to help companies focus on the most important thing – building winning teams.

From being part of a flash mob to starring in a movie, you will have plenty of options to choose from across any budget and team size. We will strive to make the  website as comprehensive and user friendly as possible and would love your comments and feedback.

Look forward to hearing your thoughts and comments!